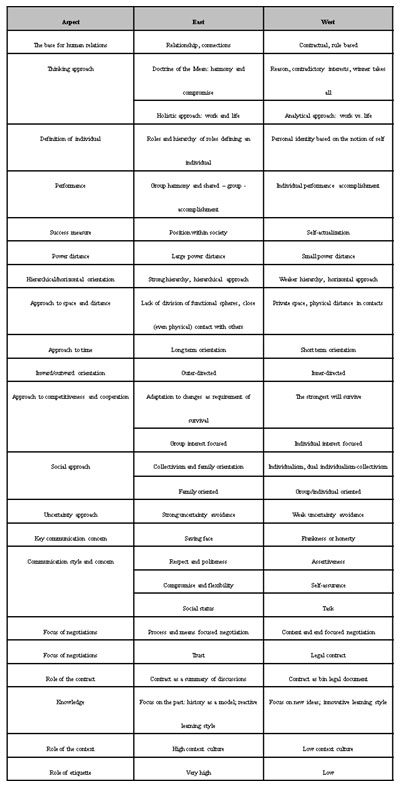 One of the most important differences in PM approaches are connected with the differentiation between contractual cultures and relationship cultures, influencing relationship management and stakeholders management. East approach is much more concentrated on the project stakeholders and their expectation and also assigns much more value and importance to the relations with various stakeholders. The specific differences are covering relationship of project manager with his own company, with the project team, with the customer and with the subcontractors. The most important of them are: paying in the East greater attention to building and maintaining personal relationships within the project team, focus on a long-term relationship with the client and subcontractor and working both for the benefits of the company and also for personal achievements.

East culture with its holistic approach, treating the elements of reality as a system can better serve the integration management aspects of PM. On one side – on the high level thinking – holistic approach means, that contemporary PM can be treated as a system, consisting of portfolio management , program management and project management and every activity in PM can be started with that system picture in mind. On the other side it also enables better integration of various aspects of project plan into the project management plan. This holistic approach together with the strive for harmony and acceptance of paradoxes leads in PM to different approaches to problem solving and finally to specific solutions. In the East culture instead of "either A or B" approach, the "and A and B" is used, giving way to different problem thinking and delivering different solution of project problems.

Chinese doctrine of mean (DOM) and the family orientation have enormous influence on the human resource management, and especially conflict resolution in PM. Chinese project manager is more project leader, than manager in western meaning, trying however to balance this two aspects: leadership and management. The roles are more important than rules, teams than individuals and relations more important than rewards and bonuses. Thus the whole East approach is much more human-centered comparing to the western approach and better fits to the requirements of the human intensive areas of PM. Different approach to the performance has also consequences in the appraisal and motivation systems, where instead of the western individual performance on the task level, the group performance, taking into account not only task performance, is conducted.

Another PM knowledge area, which experiences huge differences between West and East approach is procurement management. East relationship culture is completely opposite to Western contractual culture. Therefore the role of the signed contract in project environment is different in these two environments. While in the West it is a binding legal document, in the East is more the summary of the discussion or the snapshot of the relationship. The relationships are much more important than the signed document. Also the approach to the partner in project is different: long-term, mutual benefits and harmony maintenance oriented. Competitor can be treated simultaneously even as a cooperating partner. Strive for harmony, together with Doctrine of Mean (DoM) will express together in the win-win approach. Consequently also the scope and negotiation process – element of procurement management – will be different.

Quite substantial differences can also be seen in the schedule management PM knowledge area. The source of these differences is different approach to time in the analyzed cultures: polychromic or "many-timed" East and monochromic or "one-timed" West. Therefore the Chinese project manager will devote its attention not only to task, but also to the resources working on it. In the west project the flow of events must follow the schedule; in the East the schedule should follow the flow of events. Hence different approach to planning and execution. In the West characterized by strict, detailed plans with change management; in the East the changes are treated as normal aspect of the project, schedule is more open ended and adaptable and project plans also more closely connected to the relationship requirements. Due to the above mentioned approach to flow of events the eastern PM approach is more realization phase focused, comparing the western planning phase focus.

The presented above culture differences, leading to different PM business practices are – from one side the source of cultural shock – but from the other can be a starting point for elaborating the principles, enabling connecting these culture differences in the project environment.

The influence of culture on project management is huge, however, there leaves two big obstacles in front of building cultures suitable for a specific project. The first one is that it takes much time to build any culture. On one hand, culture is basically a kind of unwritten habits, which can only be cultivated little by little; on the other hand, a project is a kind of temporary endeavor, which needs to be finished during the time limitation. The second obstacle is that one project usually needs support from different stakeholders from different organizations or even different countries, while it’s very difficult - if possible at all- to make them share the same kind of culture. That is why we have to adopt some stable and easily sharable principles to build some bridges to connect different cultures.

The model shown in Figure 1 could be used to find suitable principles for managing projects successfully.

Step 2:  To discover what kinds of behaviors (B1) will be brought forth from the culture characteristics. For example: Taking relationship as important leads feeling shame at expressing their requirements directly.

Step 4: To find suitable principles PK1/B1 to connect the gap between  B1and K1. For example: Detailed questionnaire should be provided by the project executors to clarify the requirements of Chinese customers, which should be taken as a principle during the initial project phase.

The following list identifies some of the key principles while dealing with projects needing cooperation from Chinese people:

P11: Developing Guanxi is the most important job for a manager.

P12: Trust and faces saving are the foundations of establishing good Guanxi

P13: First make friends and then do business with them

P14: Indirect communicating and try to make nobody lose their "faces" to pursue a conflict-free interpersonal and social relationship

P15: Appropriateness is sometimes more important than the truth

P16: Meeting is a decision announcement while discussion should be done upfront and privately

P19: Agree publicly but disobey privately to avoid conflicts if one disagrees with one’s supervisor’s opinions

The followings are some principles while dealing with projects needing cooperation from western people:

P51: Goal achievement is the most important for the manager (project manager)

P53: Contract regulations between companies and between project employees define the obligations and authorities of the involved parties

P55: Act according to formally and clearly defined project roles

P57: Try to switch to direct and open relations and communication inside team

P58: View people by their task performance, not their hierarchical position

P60:  Treat uncertainty and risks as a normal in project environment

The principles in these lists can now be qualified to specific phases of the project life and to key success factors inside each phase. Such categorization will be the subject of further research.

There are also some universal principles (W. Wang (2006)] which can be applied in the mixed East-West project environment, based on the well known tai-chi symbol. Tai-chi  represents contrasting forces: their harmony and equality and also constant change, the only certain aspect of the uncertain reality. Therefore the following rules, embracing integration of the contrasting approaches and elements of the project management:

P100: Use the Yin Yang concept represented by the tai-chi symbol to combine contrasting  PM aspects

Figure 1: Roadmap from Cultures to Principles

We can also identify some meta-principles of connecting East and West culture differences in project environment, describing the approach (i.e. high level principle) enabling reconciliation of different PM practices. An example of such meta-principles are presented in W. Wang (2006). Depending on the level of cultural differences, defined according to temporal and spatial perspectives, the following principles can be identified:

The other high level lessons to be learned from Chinese approach are importance of seeking the balance and harmony and equality in every activity and balance and harmony between various elements of the system. Western project manager should seek balance within continuums: analysis and intuition in resolving problems and conflicts, divergent and convergent thinking, flexibility and discipline, control and letting go and also blend project management capabilities with a Zen-based wisdom  approach to maximize performance and achieve self-actualization. Closely connected to harmony aspects is the need to embrace paradox and substitute the "either OR" approach  with the "and and" approach.

On the project management knowledge areas the key lessons are connected with human resource management and particularly with the leadership style. Because one of the main challenges of XXI century project management is understanding human nature more deeply and stronger capturing of hearts and minds of project stakeholders, especially project team members and team leaders, the Chinese approach based on relationship, connections can be valuable for the western project manager. The key elements of that approach are: focus on interpersonal relations and group dynamic, mastering the art of getting message to the heart of project team member, and the right balance between art of leadership and the science of management and building and maintaining personal relationship within the project team. Chinese relationship approach can be also exemplified  by stakeholders management: identification of their requirements, both open and hidden and stakeholders management and treating them as one of the key project success factors. Broader application of that approach constitute the next lesson to be drawn from the East.

The western project manager can also borrow from the East practices focus on the soft skills and soft side of the project. They can cover both usage of intuition in solving problems and conflicts, informal communication, etc. Sometimes it is also worth to restrict from the managerial action, according to the Chinese "wu wei" principle, meaning non-acting and letting the things go on their selves.

There are also several referable lessons for Eastern managers:

The first and might be the most important one is that successful project needs the cooperation from other people with different cultures or habits. It is very difficult if not possible to change them during the project lifecycle, so it is better for you to keep it in mind that they are not your friends but your business partners. You can choose who will be your friends; however, you have less chance to choose your business partner. In other words, life is life while business is business.

The second important comment for Eastern managers is that project contracts and plans will ensure your success even though they will also bring you a little bit of restriction. Sometimes, you have to barter your little freedom for big freedom.

The third lesson is that even though there are many subtle channels for your communication, discussion and reports are more direct and easier tools to you, which can also decrease the misunderstandings during project management. Information is a kind of source of power, communication can help you enhance it rather than lose it.

The big cultural differences between East and West lead also to different approaches in project management, both at high level of thinking and general attitudes, as well as at the level of specific techniques and tool. Contemporary project management, challenged by the globalization is looking for new, more effective methods of managing projects and managing project-based organizations. The presented paper looks at some implications of cultural differences on project management and suggests some guiding principles, which can be used in the East, West and mixed East-West environment and which can also improve the effectiveness and efficiency of project management. Further research and analysis of the topic will lead to the extended set of principles to be applied in the various project life cycle.